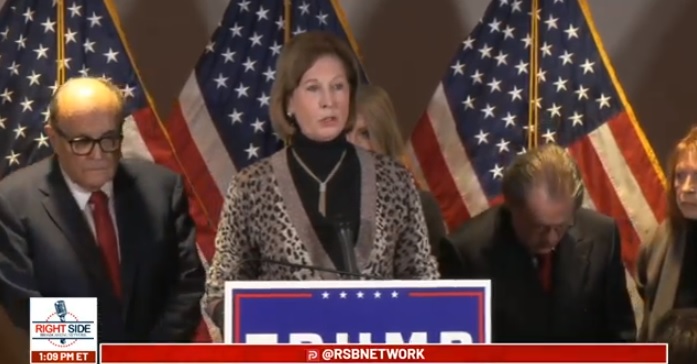 The criminal complaints are a compilation of witness statements and affidavits that spell out specific instances of potential fraud in clear detail.

In both suits, Powell said the fraud mainly took place in the form of “old-fashioned ballot stuffing” which was rendered “virtually invisible” by Dominion and Smartmatic’s computer software. According to the attorney, both programs were created and funded at the behest of foreign oligarchs, specifically to rig elections.

The strategy was first developed and used by Venezuelan Dictator Hugo Chavez to ensure he never lost an election. This was possible due to a core design in Smartmatic’s software that allows it to hide any manipulations to votes during an audit. 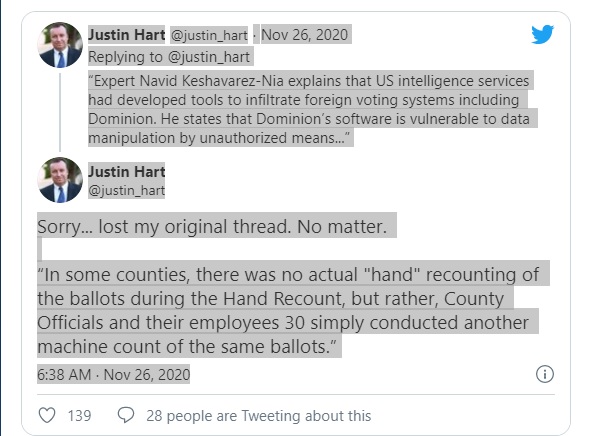 Specifically, the brain of the system, called the “central accumulator,” does not provide an audit log that shows the date and time stamps of all inputted data. This allows unauthorized users to add or modify any data stored in tabulation machines with no risk of getting caught.

Smartmatic CEO Antonio Mugica even admitted the software was prone to tampering after a similar incident in Venezuela back in 2017.

“It is therefore with the deepest regret that we have to report that the turnout numbers…for the constituent assembly in Venezuela were tampered with,” Mugica stated of the occurrence. “It is important to highlight that similar manipulations are made in manual elections in many countries, but they go undetected.”

Records from the Board of Elections found more than 96,000 absentee ballots were requested and counted, but were never returned to county clerks for certification, which made them invalid.

Another particularly notable incident took place in Fulton County. Powell claimed poll workers were evacuated from a tabulation center at the State Farm Arena for several hours on November 3.

According to Powell’s report, workers were told the evacuation was due to a water leak, which required the facility to close. However, city records show the arena’s only water leak arena happened earlier in the day. It did not affect the area where votes were being counted.

According to an affidavit from a poll official at the center, some employees were left unsupervised during the evacuation.

Meanwhile, witnesses in Michigan described incidences where they felt intimidated by poll officials. In some cases, voters were even coached on how to fill out their ballots.

In an affidavit from expert witness Russell James Ramsland Jr., he claims he witnessed Dominion voting machines injecting or fabricating more than 200,000 votes for Joe Biden.

According to his statement, four different townships reportedly received over 290,000 more votes than they had constituents.

Additionally, examples of potential vote switching as well as double voting were observed. This included sworn testimony from whistleblowers who witnessed ineligible ballots being counted, in some cases twice. 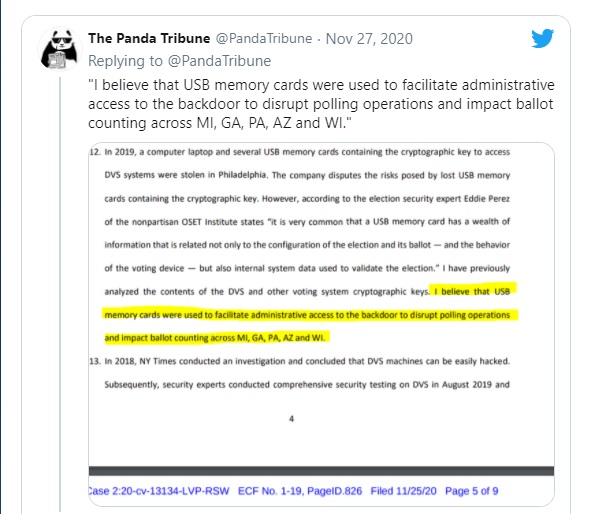 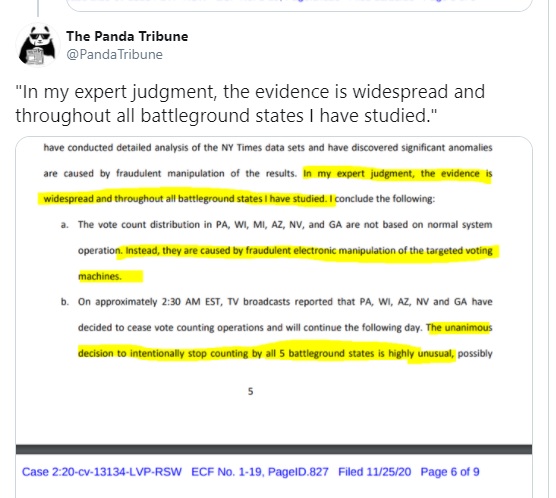 Meanwhile, Powell pointed to an instance where voters came to polling centers with completed mail-in ballots that were never submitted. The voters still allowed to cast ballots in person.