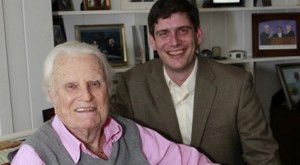 Today, I was awakened by the sad news that the man who has preached, in person, to more people and won more souls to Jesus Christ than any other man, has died. My friend, Billy Graham, also a friend to millions, has gone to be with the Lord today. Billy Graham was born in 1918 and has left this earth today, Feb. 21, 2018. The year he was born ends with an eight—a number that means a new beginning. Surely, Billy Graham’s birth was a new beginning for the world, as he would lead millions to Christ as no other man before him. Today, in the year 2018 that also ends with an eight, we see not an end, but rather another new beginning—a beginning of an eternity of walking with his Savior, Jesus Christ, and meeting millions whom he has led to the Savior, sier Jim Bakker i sitt minneord

Billy Graham walked with and ministered to the leaders of the world. During his ministry years, he prayed with every president. He ministered to everyone, from royalty to the lowest of the low. I know this ,because at my lowest moment, Billy Graham walked into my prison, threw his arms around me and said, “Jim, I love you.” The day before, I had heard that he had been voted one of the top three most respected men in the world, and now he was in my prison, comforting me. The week I was released from prison, I was sitting in the Graham home eating chicken dinner. That first Sunday out of prison, I was surrounded by the Graham family. 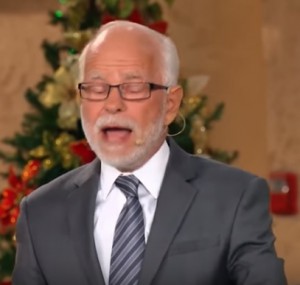 If there was and is an example of a godly, Christ-loving family, it is the family Ruth and Billy raised. That heritage lives on in their children, Franklin, Anne, Ruth, Gigi and Nelson. At this very moment, my heart aches with pain, but it also leaps with joy that Billy is walking with and embracing our Lord and Savior Jesus Christ. Some believed and have declared that the death of Billy Graham would signal the beginning of the last days. I don’t know this to be a fact, but I do know, according to the Scriptures, we are truly living in the final days before the coming of our Lord, Jesus Christ. Today, Billy Graham died at the age of 99, which is so appropriate, as the number nine means fruitfulness. At an age of double fruitfulness, Billy enters heaven, leaving an abundant legacy of fruitfulness that no man has ever before achieved. Billy often said, “My home is in heaven. I’m just traveling through this world.” Billy is home. And for that, we rejoice.