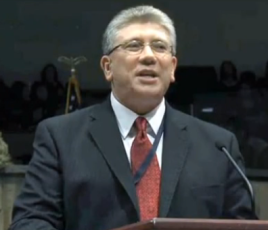 Pastor Cristian Ionescu som er pastor for Elim romanske pinsekirke i Chicago har skrevet en reaksjon på en kommentar skrevet av journalist Trygve Jordheim i Vårt Land. Jordheims artikkel ble først publisert på norsk og deretter på engelsk og kan leses her.  –An article published by Mr. Trygve W. Jordheim in a Norwegian journal (it’s in English!) is showing us how corrupted the mindset of that whole system is! Child welfare cases are never simple, for those involved or for the press covering them, skriver den rumensk/amerikanske pastoren i sitt innleggDue to confidentiality issues the authorities will never disclose anything, so access to information is controlled by parents and their supporters. The result will always be a lack of balance. -Exactly! This is why the benefit of the doubt should always stay with the accused and not with the government! Barnevernet or any other such institution, by virtue of their given authority, should apply the law based upon two prerogatives: the first will be making sure the allegations are absolutely true before they act, not after, and the second will be strict accountability to the higher government, the courts and the media! Otherwise, the damage it inflicts upon the very children they assume to protect will be greater, irremediably and more often done than intended! As for the confidentiality rules by which Barnevernet is supposedly acting to protect… what, the image of the family, already tarnished by being involved in such a case, the identity of the children, these confidentiality rules are applying to the families also!

It’s just that in their pain and sorrow, they just can’t keep their mouths shut! But according to present laws, if they disclose documents about the case, they can be arrested! How convenient for Barnevernet! So, who is benefiting from these laws? The author of the article starts from the premise that governmental agencies and their workers are always right, well intentioned and perfectly applying the law. Really! But, let’s talk about these laws, because this is where persecution starts Mr. Trygve W. Jordheim! With absurd, flawed laws! But even those laws, as radical and overreaching as they are, were broken in many cases, but who’s going to know since Barnevernet IS PROTECTED against any inquiry? Let’s see this vicious cycle for what it is: first they act on allegations – sometimes anonymous – then they investigate and then, while still investigating for a long time, they are already talking about placing the children for adoption! As it happend in previous cases, after many years of separation between the biological parents and their children, even if the case had been proven wrong, they have created a situation where their actions become irreversible! Therefore, Mr. Trygve W. Jordheim, because these families and these parents stand to lose everything, it would be ok for them to „control the access to information”, which by the way they can’t, because the unbalance that you so diligently decry had already been perpetrated against them: they are without their children Mr. Trygve W. Jordheim!

The stories that thrive in support groups on Facebook, about mothers who – out of the blue – are deprived of their children by the evil Child protective services (in Norwegian: barnevernet), falls on its own absurdity. It takes very much to have your children taken away in Norway.

This is so sweet! And, Mr. Trygve W. Jordheim, how do you know that, since, per your own admission, you have no access to the information? Ah, you believe in the system, it can’t be that bad! It must be the parents, those evil, violent monsters! And my friends, that’s how democracy becomes the tool of the very oppression it fought to eradicate! But Mr. Trygve W. Jordheim won’t stand for it:

And it does certainly not happen on the grounds of «religious indoctrination», as some people around the world now seem to believe. The US website Christian Post wrote about a Norwegian-Romanian couple, residing in Norway, being stripped of their five children because they were «radical» Christians who «indoctrinated» their kids. The decision is supposed to be based on a «teacher’s concern».

But in the same breath, he cites a view somewhat different:

The Norwegian website Document.no ask: «Is it the view of the Child protective services that Christian teaching is a form of radicalization and sufficient legal basis for depriving parents kids?» The author underlines that this actual matter does not seem «to be totally without nuance». So, now it’s just a „nuance” but hey, you can’t call that persecution, not yet anyways! Of course, he is acknowledging our reactions and international coverage of the Bodnariu case:

Romanian medias coverage of the case has triggered a huge protest outside the Norwegian Embassy in Bucharest last Saturday. Protests have also been planned in the US, according to Christian Post. The Facebook page «Norway, return the children to the […] family» (run by a family member of one of the parents) has more than 14.000 likes. According to the Norwegian newspaper Dagen, an online campaign has received more than 40.000 signatures.

But, wherever the truth may be – and it’s not in the sand Mr. Trygve W. Jordheim! – the idea is to not accuse the Norwegian society of religious persecution: Because of the large number of e-mails we have received, the allegations of religious persecution and the international dimensions, we decided to take a closer look. We contacted people in the municipality and journalists in the local papers, and we tried to get in touch with the parents. Nothing that we have learned, has pointed towards this being anything other than a «normal» child welfare case.

Yes, there must be some uneasiness about differing world views:

To a certain level it is understandable that in some people worldview, the Child protective services is a tool the authorities use to control the citizens’ private sphere – if they’re from a country where the regime is or has been more totalitarian than the Norwegian authorities. Here there has recently been a debate about Christian symbols on the walls in reception centers for refugees, and every year we have the same arguing about schools taking the pupils to church before Christmas, but that’s about it.

Yet another disclaimer, now that’s pretty:

Yes, it is true that the Norwegian minister of education ten years ago was quoted saying «the belief that the parents are best suited to raise their children, is mistaken», but he was quickly put in his place by the vast majority.

Really, the very same majority that had been silent until now, Mr. Trygve W. Jordheim? Or, maybe, just with its head buried in the sand?

Tuesday brought the first mention of the matter in the serious press. The local newspaper Firda reported that the couple now risk six years in prison for violating the criminal law section covering «domestic abuse» for «threats, coercion, deprivation of liberty, violence or other violations». Even clearer: The parents are being charged for violence against their own children.

– In the Child welfare act, there is no legal basis whatsoever for taking children from their parents based on religious or other beliefs, says Hanne Sæbø at County governor’s office of Sogn og Fjordane, in Firda.

So, it’s been established, read no further, but:

It must be emphasized that there still is no indictment against the parents of the five children, and that the matter certainly could end with the family being reunited without anyone being prosecuted. The best possible outcome would be for all the claims being disproved.

Maybe some people should reevaluate the true meaning of the word «persecution»?

But when someone cries «religious persecution» in a case where not even those in the media who tend to be concerned with issues like these can find any trace of it, it’s important to remember what happened to the boy who cried wolf: When the wolf actually appeared, no one came to rescue.

Public religious persecution and undue interference in family life should be taken seriously, both by the press and the public. Similarly important is that the terms are not used so lightly that people stop taking them seriously.

And where is the line between „lightly” and „serious” Mr. Trygve W. Jordheim?

Unfortunately, this article shows us how Barnevernet came to be so abusive and downright evil! With the complicity of the likes of Mr. Trygve W. Jordheim, who lacks access to the case, but earnestly believes in the system and gives the benefit of the doubt and the presumption of innocence to the government instead of the accused, in this case the Bodnariu family, victims of the system, but also of a mindset that will only see persecution when it is no longer subtle!