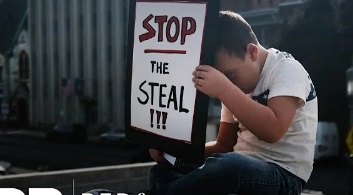 Hvorfor er de så livende redde?  Social media giant Facebook shut down “Stop The Steal,” a pro-Trump group with hundreds of thousands of members that were allegedly organizing protests of vote counts around the country. The group had grown to more than 361,000 members within 24 hours and was centered on protesting the administration of the election, which organizers allege has affected by widespread voter fraud, The Wall Street Journal reported.

The social media giant’s decision to remove the group was “in line with the exceptional measures that we are taking during this period of heightened tension,” according to a Facebook spokesman Andy Stone who said “Stop the Steal” was “creating real-world events.”

“The group was organized around the delegitimization of the election process, and we saw worrying calls for violence from some members of the group,” he said in a statement.

Several media outlets reported a pro-Trump group called “Women for America First” who had created and operated the Facebook page.

“We need boots on the ground to protect the integrity of the vote,” the Facebook page said before it disappeared from view. It encouraged people to donate to help pay for “flights and hotels to send people” to battleground states including Georgia, North Carolina and Pennsylvania.