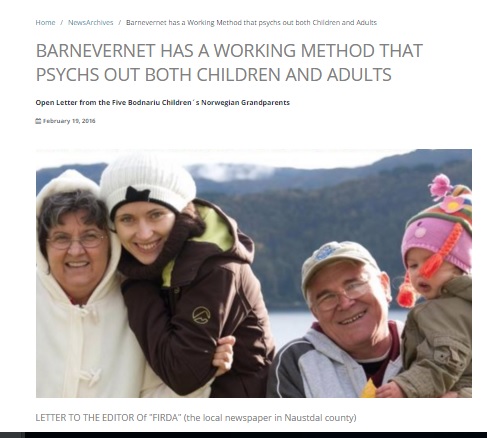 We have not wanted to come out openly in the media, because it can so easily be misunderstood. But based on the article in Firda (translator´s comment: The local newspaper) by the Chief Administrative Officer of Naustdal county, and the editorial in the newspaper, we find it necessary to tell about the factual circumstances around the much talked-about Barnevernet-case in Naustdal. We do not think it is alright that the Chief Administrative Officer, other county employees, or anybody else be harrassed or bullied. But when we know that this case was a shock for many and especially for us in the family, then it is not strange that there would be reactions.

This case has hurt the whole family and way beyond us. It has also been painful to read articles about the case in different newspapers where the upbringing of the children has been presented negatively without knowing the actual conditions. We who live here in the home and have had the children around us since they were born, must be the ones who know best how the children have been with their parents. Grandmother has at times taken much care of the children. When they came from school and the parents were not at home, the kids were with us. When their present home was being refurbished, the whole family lived with us for six months, and we thereby had full insight into their upbringing.

We can assure that we have never seen that violence has been used against the children. Not even that they have raised their voices to them. The children themselves have never told us that the parents have been nasty to them. For us who love our grandchildren so much, it would be inconceivable to know that they were not happy and not to intervene. After all, we are well informed people.

An enormous number of phone calls have come to us in this time. People are totally disturbed when they hear which approach Barnevernet has used. A women from Oslo had learned about this case through the media. She asked if Barnevernet has taken away the children based on what the children have said. Could that be possible? she said. Then she told us that she had been involved in Barnevernet in Oslo. For her, this was an outrageous approach. While the Chief Administrative Officer says that “Barnevernet in Naustdal has done a good job”.

A close relative who lives another place in the country has an 8 year old son. He came home from school and claimed that the teacher had taken a stranglehold of him in the classroom. Mom questioned that, but he said this repeatedly. She contacted the teacher who was devastated. It was established as a fact that this was not the case. We have heard similar cases when children have come home from school and other places and told things that were not real. Everyone who has kids knows that they can exaggerate and take things out of context. Children can be influenced by games and movies, and can say what seems fitting based on the questions they are asked.

We perceived from what the editor wrote in the editorial that he has chosen side in the Barnevernet-case. He mentions especially Christian upbringing, and writes that this “of course is total fabrication”. Well, then let us see what the principal of the school, according to the case documents, says in the telephone with Barnevernet on October 13th: “The school tells that it is a very Christian family with strong faith, a sin concept (translator´s remark: “syndstenkning” implies conviction of the sinfulness of man), punishment from God. All aunts and uncles share this view. The principal thinks that this inhibits the children”. Is this fabrication? We could also ask why this is brought into the report from the school? This cannot be perceived in any other way than that the principal maintains that Christianity is damaging for the children.

During police examination, the mother´s father was asked whether he knew that the children were exposed to some pressure (indoctrination relating to the Christian faith). When the mother´s father started to answer a little to the side of the question, he was told to not say anything other than what the case is about. Therefore the Christian upbringing is what the case is about. Is this also fabrication?

It is somewhat odd to note that foreign media have understood what has happened in Naustdal county in this case, whereas Norwegian media have not understood, or rather, don´t want to understand. Here we are living in the old assumption that “little and kind Norway” does not persecute Christianity – but there are many ways to do that.

The editor of Firda says in the editorial that one must “trust that Barnevernet tries to do what is the best for the children”. Yes, but how are the children doing? Well, they say that they cry a lot and miss their parents. Both of them said that repeatedly. They wanted to go back home. The oldest girl is now 10 (in January) said in a phone call on January 14th when mother´s father was present (first contact since November 16th) that she was super-angry when they prohibited her from meeting her parents.

Defenseless children are held captive away from the home against their will. We cannot find words to express what we feel. And this is called by the county´s Chief Administrative Officer: “Barnevernet in Naustdal has done a good job”. We must be allowed to ask: What is on the inside of people who can do something like this against someone´s children?

Barnevernet has a working method that psychs out both children and adults. They cannot have any other objective than to have the children and parents break down. It is hard to have to say this, but based on the actions of Naustdal´s banevern, as we have experienced it, our perception is that no family with children in the county should feel safe, especially foreigners.

Please excuse us, Chief Administrative Officer, but we have good advice to give: Now the time has come for you to resign. Anf bring Barevernet woth you.

The county and we who live here cannot accept that Naustdal has become world famous because of a merciless Barnevernet that keeps children captive so they cannot come to their good home with good parents.