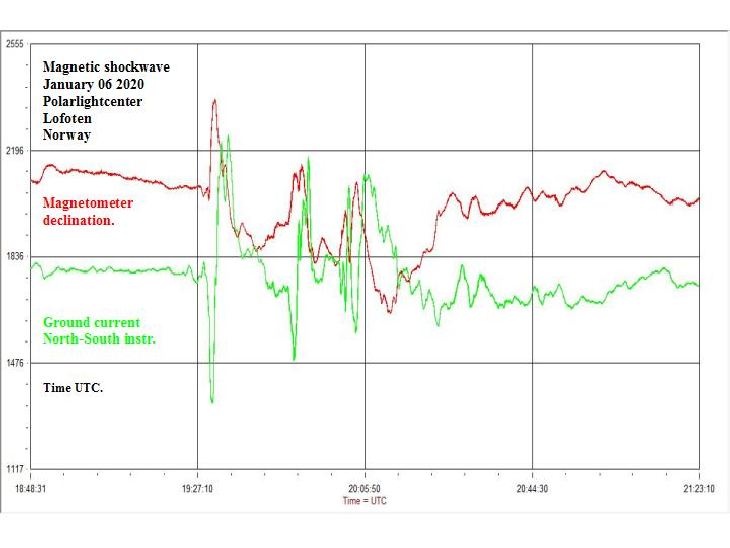 ELECTRICITY SURGES THROUGH THE SOIL OF NORWAY: Yesterday, Jan. 6th, something unexpected happened in the soil of northern Norway. “Electrical currents started flowing,” reports Rob Stammes, who monitors ground currents at the Polarlightcenter geophysical observatory in Lofoten. This chart recording shows the sudden surge around 1930 UT: “It seemed to be some kind of shockwave,” says Stammes. “My instruments detected a sudden, strong variation in both ground currents and our local magnetic field. It really was a surprise.”

NASA’s ACE spacecraft detected something as well. About 15 minutes before the disturbance in Norway, the interplanetary magnetic field (IMF) near Earth abruptly swung around 180 degrees, and the solar wind density jumped more than 5-fold. Earth may have crossed through a fold in the heliospheric current sheet–a giant, wavy membrane of electrical current rippling through the solar system. Such crossings can cause these kind of effects. While currents flowed through the ground, auroras filled the sky. Rayann Elzein photographed the corresponding outburst of lights from Utsjoki, Finland:The auroras and ground currents were caused by the same thing: Rapidly changing magnetic fields. High above Earth’s surface, magnetic vibrations shook loose energetic particles, which rained down on the upper atmosphere, creating auroras where they struck. Just below Earth’s surface, magnetic vibrations caused currents to flow, triggering Rob Stammes’ ground sensors.”We couldn’t see the auroras in northern Norway because of cloud cover,” says Stammes, a little ruefully. “We had to be satisfied with the electricity underfoot, melder nettstedet spaceweather.com